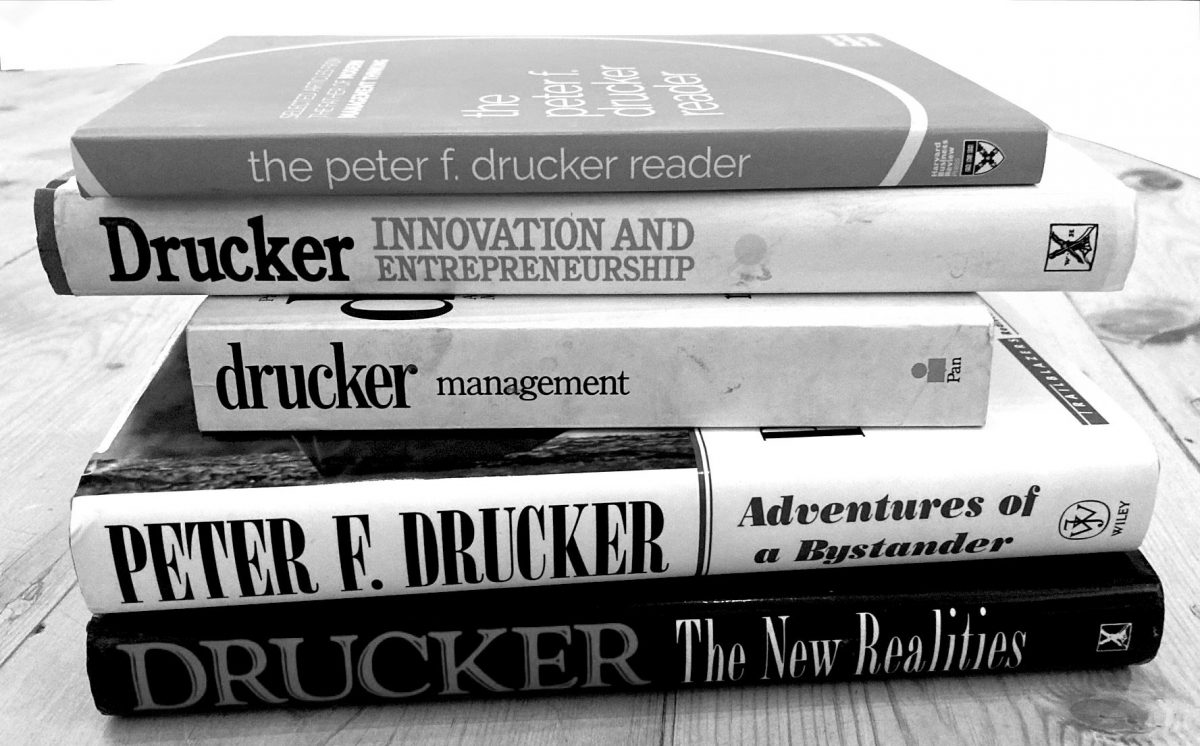 I’ve been reading Peter Drucker recently. Or re-reading: you couldn’t not be aware of him in the 1980s and 1990s, when a new tome with his name on it dropped on your desk every year or two (he wrote 40 in all), with names that often seemed to have little to do with management  – eg Post-Capitalist Society, The New Realities, or, somewhat bafflingly, Landmarks of Tomorrow.

At the time, though, I didn’t get him. He seemed to write in sentences that were both obvious and obscure. ‘The purpose of a business is to create and keep a customer’. ‘Management is doing things right; leadership is doing the right things.’ ‘Management and managers are the … constitutive organ of society’. What on earth did some of his famous one-liners even mean?

Had I been listening, one of the things those titles were saying was that Drucker was quite different from nearly all other management writers (apart perhaps from Charles Handy) in that management was not actually his primary concern. Paradoxically the ‘father of management’ was interested in management only because he was more urgently interested in something else. And – another paradox – management is the richer for it.

As you would be as a clever, well-connected young man in Vienna in the 1930s, Drucker was deeply preoccupied with world politics and society, and particularly the subterranean social currents from which totalitarianism had welled up in the shape of communism and fascism. It’s impossible to overestimate the importance of Drucker’s formative Viennese influences, rubbing shoulders as he did with Hayek, Mises, Schumpeter and Polanyi, as well as artists and musicians. ‘Management was neither my first nor has it been my foremost concern. I only became interested in it because of my work on community and society’, he wrote later. Either implicitly or explicitly, that wider interest is the subject of all his work.

For Drucker, the reason management matters is simple and basic. It isn’t an end but a means. The end is a free and functioning society, which can’t exist without thriving independently-run organisations and institutions. They depend in turn on good management. ‘Our society has become…a society of institutions,’ he wrote. When organizations are ineffective and corrupt, a command economy and society is the only alternative. That is what he meant by management being ‘constitutive’: ‘Performing, responsible management is the alternative to tyranny and our only protection against it.’

From this everything else follows. For Drucker, management was a moral profession, with a duty primum non nocere, first to do no harm. Companies, being part of society, had a direct stake in its health; too systemically important to be under the control of any one constituency, they and their managers had a first positive duty to make productive the resources that society put at their disposal. Profit was both a test of their effectiveness and the essential down payment on the cost of the future jobs and useful products it was their task to provide.

On the other hand, what profit wasn’t was a business’s purpose. Indeed, the nearest Drucker comes to a rant is his exasperation with managers for the complacent and circular way they used the profit motive (which he dismissed impatiently as the invention of neo-liberal economists to justify their equations) and profit maximization to explain their behaviour. Widespread public hostility to profit was their own fault, he declared: ‘In the terms management uses when it talks to the public, there is no possible justification for profit, no explanation for its existence, no function it performs. There is only the profit motive, that is, the desire of some anonymous capitalists – and why that desire should be indulged in by society any more than bigamy is never explained. But profitability is a crucial need of economy and society.’

This was written in 1974, when Drucker was already alarmed at the prospect of growing inequality and managers trashing their organisations’ reputation and legitimacy by ignoring their own social impacts and obligations – particularly the duty to create good jobs, which he correctly saw as the glue that kept society stitched together.

You don’t have to agree with everything Drucker said to see many further resonances with today. He would have treated with contempt Boris Johnson’s crass assertion that the warp speed arrival of Covid vaccines was due to ‘greed’ and ‘capitalism’. On the contrary, he would have described the UK experience, at least, as a too-rare case of ‘the society of institutions’ working as it should: decisive action by government to de-risk vaccine manufacture with bold advance orders, meshing with Oxford University’s public-sector research and Astra-Zeneca’s acceptance of the challenge to distribute it initially on a non-profit basis, and procurement followed up by the NHS’s near faultless execution of the vaccination campaign.

As for capitalism, Drucker judged it potentially a better basis for a free society than anything else on offer – but by no means unconditionally. It was constantly in danger of being subverted by the blind pursuit of money and profit. He hated managers benefiting directly from laying people off. Capitalism wasn’t an end goal in itself: ‘Free enterprise cannot be justified as being good for business. It can only be justified as being good for society,’  he wrote in 1954’s The Practice of Management.

Drucker was the moral conscience of management, which he viewed as a ‘liberal art’ – something that required broad human wisdom and judgment to harness the technological tools available and guide the art of practice. These were deeply unfashionable concepts in the era of financialisation when the only social responsibility of business was ‘to increase its profits’. (This is why his books barely figure in business-school curricula, majoring as the latter often still do on finance and shareholder value.)

Characteristically, Drucker’s last book was a collection of essays entitled A Functioning Society. If he were alive today, that would surely still be his central concern. And as we ponder the future of our economic institutions in the light of Covid, in the wake of Brexit and Trump, management itself would be right in the front line.

As Jerry Davis points out in a powerful recent essay on the weakness of purpose in the face of omnipresent pressures of shareholder value, ‘nearly every major societal pathology in the West today – certainly in the USA – is caused or exacerbated by profit-oriented corporations’. Think opioids (thank you, Big Pharma), obesity (Big Sugar), nicotine addiction (Big Tobacco) and climate change (Big Oil), all of whose managers have used relentless lobbying and misleading scientific evidence to confuse opinion and protect their profits, at the expense of the wider community.

But today the even more immediate danger to Drucker’s ‘free and functioning society’ is the potential reengineering of humanity itself through social media, aka Big Tech. The threat is no longer a blunt totalitarian ideology from outside but (Davis again) ‘a dystopian nightmare of increasing corporate dominance, in which a handful of unaccountable corporate hegemons use pervasive information technology to control our daily lives’ for their, their shareholders’ and manipulative politicians’ profit.

Deployed differently, those same technologies could also open up the prospects for democratic renewal, and there are some pressures from below in this direction. Will they be, though? It will need support from governments to weight incentives against doing the wrong things – no honest company should be handicapped against less scrupulous competition – and Biden’s support for trade unions is also welcome. But in the end it won’t happen unless management finally lives up to the responsibilities Drucker ascribed to it. As he almost said, good intentions, like plans, are worthless ‘unless it all immediately degenerates into hard work’.